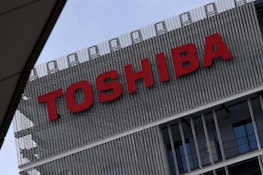 Westinghouse, bought from the British government in 2006 at twice the expected price, and a small US deal agreed in 2015, resulted in cost overruns and costly delays at the US business. Toshiba has sought to restore control to its credit problems by pulling out of nuclear power plant construction overseas, reducing its involvement to reactors and services. Reuters has reported that Toshiba was seeking at least a partial exit from ventures in Britain and India.